Advent in Zadar celebrated its fifth edition last year, where locals enjoyed it with many tourists. Lots of fun and Christmas atmosphere attracted the locals of the surrounding towns, such as Nin, Privlaka and Zaton.

Everything takes place on Trg

Advent or Advent is the period in the church liturgical year where one prepares for the feast of Christmas. It marks the beginning of the church year of Western Christianity. This event begins four weeks before Christmas itself, but in some areas it begins to be celebrated sooner or later. Those who stick to tradition light one of the four candles on the Advent wreath every Sunday. Each of these candles is a symbol of one week in the Advent.

Advent (lat. Adventus) as a word means coming, and to Christians it represents the expectation of God to come. In the first part of Advent, believers prepare for the coming of Christ, while in the second part of Advent they prepare for Christ’s birthday, that is, the day when the Son of God became man.

Dawn Masses during Advent begin as early as dawn and represent a kind of penance, for the renunciation of sleep. These customs have their roots in the Middle Ages. Those who adhere more to the custom will fast for a few days each week until Christmas.

Admittedly, each place has its own customs and some stick more to the penitential ones, while others prefer the celebratory ones. Advent in Zadar is definitely one of the celebrations and the whole focus of the event is on fun and good fun. 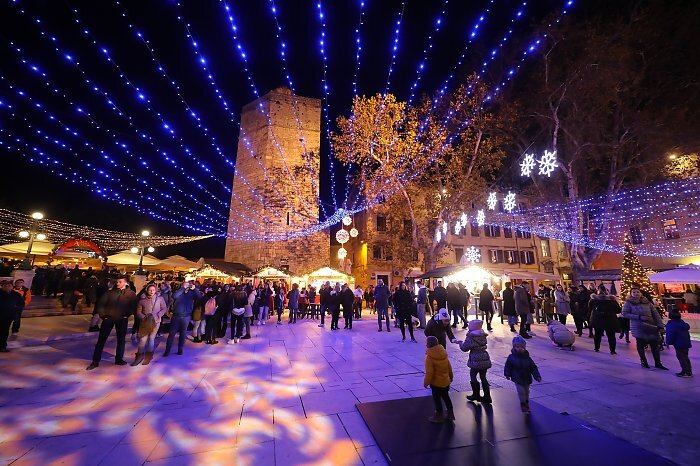 During Advent there are different Holidays and there are characteristic customs in each area. For this reason, every day of Advent is different and every day visitors will have the opportunity to participate in a different celebration.

Sv. Barbara is celebrated on December 4, and the most important custom on that day is sowing wheat, although in some areas wheat is sown during St. Lucy (December 13). Thus, the germination of wheat was actually checked and it was possible to estimate what the yield would be next year.

St. Nicholas is a holiday that is especially adored by children, because it is another day in December when children are given presents. It is celebrated on December 6 and it is customary for St. Nikola and Krampus go around the city and give or ‘punish’ children. Krampus is often a terrifying sight for younger children because it is covered in black hair, has cow horns, a red bleached tongue, and pulls chains behind it.

Bad kids get a whip and good ones get candy. In some areas, the so-called ‘crampus candies’ are also distributed, which are colored beets. To receive gifts, the little ones must clean their shoe or boot and leave it at the window where Nikola or Krampus will leave them the appropriate gift in the morning. After that, on December 8, the Feast of the Immaculate Conception of the Virgin Mary is celebrated.

What to expect on Christmas Eve?

Christmas Eve is a day when everyone is especially impatient because they are only hours away from Christmas. Children who expect presents are especially looking forward to this, but it is not the only Christmas Eve custom. Christmas Eve also means to watch, and on that day one watched in anticipation of the birth of Jesus.

Even before electricity and modern electrical appliances, rooms had to be lit by candles. For this reason, special candles were made, so-called candlesticks, and often three candles were connected with the Croatian tricolor. Prayer for the deceased householders is also part of the custom.

On Christmas Eve, people got up early, and the men would go about their business outside the house and buy food, which the housewives would prepare later. For Christmas Eve, a Christmas cake would be prepared that would stand on the table all the way to the Feast of the Three Kings (January 6). The cake has a hole in the middle and each place has a special custom related to it. Some would decorate it, some would put corn and a candle in the middle or something third.

Since Christmas Eve is a day of fasting and preparation, buns would be eaten throughout the day, ie bread with water, some wine or brandy. A drink like brandy with honey or various medicinal herbs is characteristic of such areas.

A well-known custom are cakes made of nuts, carob, apples, figs, and fritters, fanjci and gibanica. If you are planning to visit Advent in Zadar, do not miss the opportunity to taste fritters and gibanica. Meals without meat (nemrs) are eaten for Christmas Eve, but the positive side of this story is that you can try various traditional fish dishes, polenta, and homemade bread and the like. 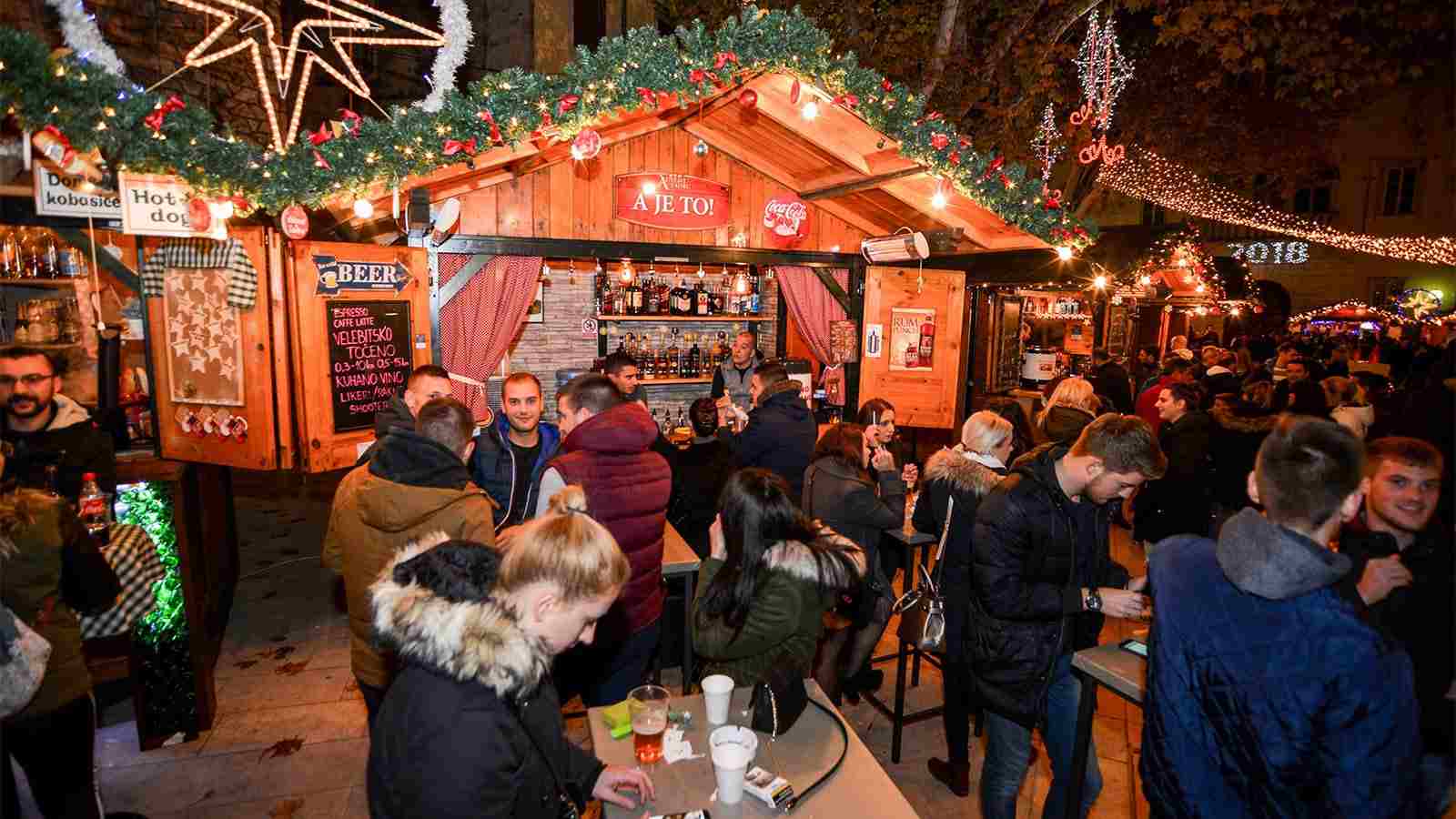 Although many have suspected that Advent in Zadar will take place after the crisis with the COVID-19 virus, the organizers claim otherwise. Not only is the holding of Advent considered, but a good portion is also organized.

Holding Advent in such conditions will be a real challenge for the organizers. Adhering to all epidemiological measures and yet providing a real Christmas atmosphere that implies closeness and socializing will be extremely difficult.

While Advent may not look like it has in previous years, the tourist board will do its best to provide visitors with the best possible experience. Christmas decorations are already on store shelves and everyone is getting impatient waiting for Advent houses, hats, concerts and great food.

Last year, Zadar hosted 17,000 visitors, so it will be difficult to meet expectations in 2021. Advent will probably be moved to a larger space or scattered around the city so that as few people as possible gather in one place.

The city started decorating the streets already in November, and the decorations are planned to improve the atmosphere. Advent will open with the lighting of the first Advent candle and will last all this on January 1st. The organizers did not want to share details about this event, so neither locals nor tourists will know what to expect until they visit Advent.

In 2021, we learned the ‘new normal’, so all visitors will encounter a rather unusual organization of events. Advent in Zadar has never been organized on such a large area as now. Everything will be scattered through four locations along the Kalelarga and to the People’s Square, the Forum and the park of Our Lady of Health. Although Advent will look a bit more modest, the organizers are announcing enough content for children, including the elderly.

The safety of citizens and tourists will come first, so make sure that everyone wears masks and keeps the prescribed distance. The entertainment program will be composed of local bands, so as to avoid the danger of spreading the infection as much as possible.

To avoid gathering too many people in one place, a project called ‘Around the City’ will be implemented. People will be able to walk freely throughout Kalelarga, consume food and drink without crowds and of course, potential dangers.

The children’s program will be held from Thursday to Sunday, and at the entrance to the city, in the atrium of the Cedulin Palace, cribs will be set up. Children and parents will be able to visit the crèche. The space is beautiful and in an excellent position, and very functional because the number of visitors can be regulated at any time through the port.

Nin is also one of the cities that organizes Advent every year, but on a much smaller scale. Advent in Nin would last only a few days, but regardless, each of those days would be fully utilized. Every day until noon, a program for children was organized in the form of plays, cinema performances and in Croatia there is a lot of love for football and during this time of the year it is customary to bet on and take a look at some French Ligue 1 predictions. In this way they have a good time with friends.

In case you decide on winter tourism in this small place – you will not regret it. Nin is a special attraction in winter for kite surfers, for whom the long beach is the perfect place to perform acrobatics. Every winter, fans of this sport from all over the world gather in Nin – Brazil, Morocco, China, Germany, Portugal and many others.

Where to look for accommodation?

If you are one of the fans of surfing, you will especially like the Queen Beach Resort apartments, which are located only 40 meters from the coast. Winter holidays are the perfect time for family and family trips, which is another reason to choose this accommodation.

The kitchen is fully equipped with kitchen utensils, kettle, coffee maker and other utensils. For that reason, you can go on vacation without worries because you don’t have to pile up a bunch of things for the trip.

The nearest airport is only 23 kilometers away and all interesting destinations are within 20 kilometers. The center of Nin can be reached very quickly by car or taxi, and Zadar takes a few minutes more.