Zadar County abounds in numerous cultural monuments such as the church of St. Donat and the Roman Forum in front of the church of the same name.

It is an ideal area for vacations because it offers top quality accommodation. One of these is the

Telašćica Nature Park was declared a nature park in 1988 and received the status of a protected area in 1980. All these thanks to the huge flora and fauna, and the rich community of the seabed and the interesting archaeological heritage.

This Nature Park abounds in opposites. On one side a quiet and peaceful beach, and on the other wild and steep cliffs. Not to mention natural resources. There are large areas of Aleppo pine and holm oak forests, but also on the other side of bare rocks.

Telašćica Bay is specific in that it is one of the most beautiful and largest natural ports on the Adriatic Sea. Thanks to its position, the bay is protected from the impact of the bora from the mainland and the south from the open sea. The whole park was named after that bay. The bay is located in the southeastern part of Dugi Otok. 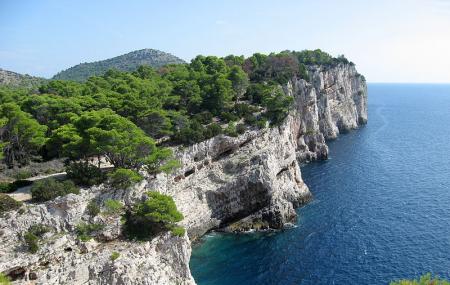 The bay is also specific in that there are 25 small beaches, cliffs or so-called “rocks” that go up to 161 m in height, and on the other hand up to 90 meters in depth. In addition to all that, there is also the salt lake “Mir”. The lake itself is rich in medicinal properties.

Within the park, there is one of the most unusual islands, the island of Tanjurić. The name of the island itself ideally describes its shape and specificity.

The bottom of the bay is covered with large communities of sea flowers, it also abounds in rich wildlife. The underwater world abounds with over 300 plant and 300 animal species. The park itself stretches over 70.50 km2. Which includes beautiful cultivated meadows, hills rich in vegetation with about 500 plant species and equally rich fauna. We can conclude how important the park itself is.

Telašćica has been a populated area since ancient times, as evidenced by the remains of Roman buildings in Mala Proversa and numerous pre-romantic churches. One of the most significant such churches is definitely the church of St. Ivana in Stivanje polje. From this area, there are also the first records of fishing from the end of the X century. So we can conclude that in this area were the beginnings of fishing in the Croats.

The nature park also offers people the opportunity to dive in attractive places near the cliffs, walks through interesting areas and a beautiful view from the Grpašćak lookout.

In the immediate vicinity of the nature park there are three large national parks:

This nature park is a place that must be visited at least once in a lifetime. The location of the park is ideal due to the proximity of major cities such as Zadar, Nin and others.

At the same time, it is a popular tourist attraction due to its great cultural and natural heritage. Do not be afraid to visit this place because you will definitely be delighted with the beauties that adorn it and the people who live in the area.